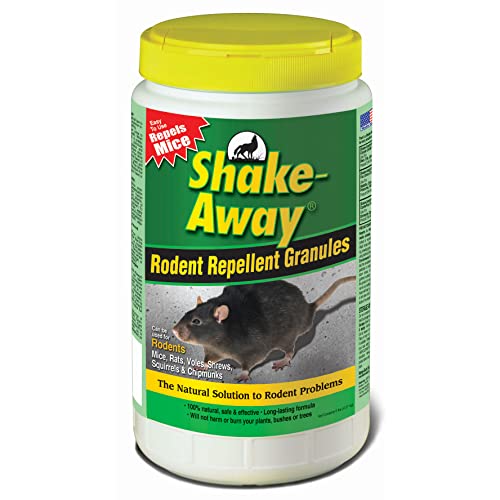 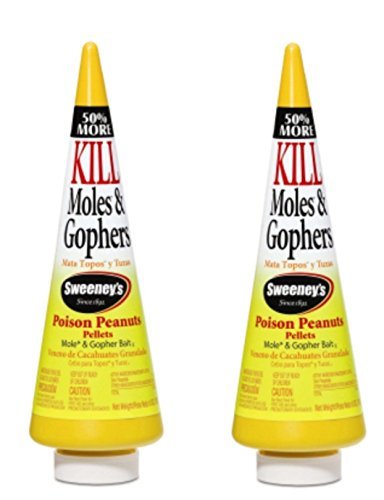 Though many may think chipmunks are cute, they can cause damage to your home and yard and tend to breed quickly.
Take the necessary steps to prevent chipmunks altogether from coming onto your property.

If you have a chipmunk infestation in your yard, the cuteness factor was readily replaced with annoyance when you saw the yard damage they caused. Now it’s time to start figuring out how to get rid of them.

Chipmunk poisons are one of the most effective ways to rid yourself of what can become a major headache. We’ve compiled a list of the three best chipmunk poisons to help eradicate your infestation in no time.

How We Found the Chipmunk Poison

This is the first all-in-one solution to eradicate chipmunks. Not only does it contain poison, but it comes with traps as well. It’s the best overall option available.

If you find yourself wondering how to kill chipmunks, look no further than the Tomcat All-Weather Bait Chunx. We believe that this is the best chipmunk poison available on the market today. In addition to a four-pound bucket of poison bait, customers can also purchase a kit that includes a Rodent Bait Station and glue boards.

Customers must place new bait in the station every few days. Chipmunks must eat the bait multiple times before they will die.

If you are running low on chipmunk poison, this product could help. It is the ideal solution to help replenish poison bait.

Using JT Eaton’s Bait “Bock Rodenticide is one of the best ways to get rid of chipmunks. The product is incredibly affordable, as customers can purchase more than 140 bait blocks for approximately $25. The company offers a one-year warranty on the product in case of defects, which makes them a sustainable and useful option. The pail is also tamper-proof, making it safe to store in the home.

Chipmunks will need to eat this bait for a few days before it will kill them. Fortunately, the product tastes like peanut butter. Chipmunks should be attracted to it and should view it as a viable food source. Unfortunately, there is no way for customers to know when the rodent will consume the lethal dose. That could pose a challenge if customers decided to use the product indoors.

This is a potent poison solution best-suited for outdoor chipmunk nests. We found that it is the best small volume option available.

If you discover one or two small nests of rodents in your yard, then you will want to consider Sweeney’s Poison Peanuts, our pick for the “Best Small Volume” product. This product is affordable — a pack of two costs less than $15. Users can put the peanuts into chipmunk nests, where the rodents will then consume the product.

Once the rodents eat the peanuts, they will pass away. This product contains harsh chemicals. It is not safe for use around children and pets. Customers cannot use the product indoors. They should be mindful before letting their children or pets outside to play. The product is safe to use in gardens, however. Because the peanuts go underground, you cannot use a trap.

The Advantages of Poison

If you have a massive chipmunk infestation, using poison could be a practical solution. Of the options available to get rid of chipmunks, poison is one of the easiest to use. Customers need to do no more than lay the poison in an area where the chipmunks tend to frequent and watch it go to work. The poison is often flavored to taste like peanut butter, which will attract the rodents.

If you do not have a massive chipmunk infestation, then poison may not be the best solution. Because the poison will attract the rodents, you could end up doing more harm than good, in that you’d be causing more rodents to frequent an area. So, you should only consider using the best chipmunk poisons in space where the rodents have already established themselves, and an infestation is obvious.

When rodents eat poison, it will cause hemorrhaging and internal bleeding until the creature passes away. Depending on what type of poison you use, this may not happen immediately. If your rodent infestation is indoors or around the perimeter of your home, you may want to consider using traps or glue boards with the poison.

When this happens, it increases the chances that you know where the rodents will die. Unfortunately, one of the problems with poison is that chipmunks will consume it and then die in an unknown area, creating an unbearable stench. By using poison with traps or glue boards, it becomes much easier to locate and dispose of the dead chipmunks.

Some Poison Is Not Safe for Use Around Children

When browsing through the best chipmunk poisons, you’ll find that there are two available. First-generation poison is a slow-release poison, while second-generation venom contains chemicals that act immediately. Chipmunks must feast on first-generation poison for about five to six days before they consume enough of the compound to die.

First-generation poison, on the other hand, is generally considered safer. Now, that doesn’t mean that your children or pets should play with or consume the poison. But the dosage is much lower, so the risk of harm is not nearly as high. While we still recommend that you call Poison Control for advice, it is not as dire of an emergency compared to when children or pets consume second-generation poison.

No matter if you are using first or second-generation poison, you’ll want to check it consistently. The rodents will likely feast on the poison. Keeping a fresh supply will indicate to the chipmunks that the poison is a viable food source, which will cause them to keep returning for more. We recommend checking poison at least every week.

You’ll also need to check to see if the rodents died. When a chipmunk dies, it will cause strong, unpleasant odor. Furthermore, a dead chipmunk increases the risk of the spread of disease. You’ll want to ensure that you dispose of deceased chipmunks frequently to protect the health and safety of your family and pets.

If you discover a chipmunk infestation, you should take steps to control the problem. Chipmunks can spread disease and infections. Their nests can also wreak havoc on your yard.

The three poisons we’ve recommended vary in cost, so you can find the one that best fits your budget. If you’re willing to invest in controlling your chipmunk problem, consider our “Best Overall” option. We appreciate that this comes with a complete kit, including traps and glue boards. Our other two choices are also excellent options, and you cannot go wrong when choosing them.