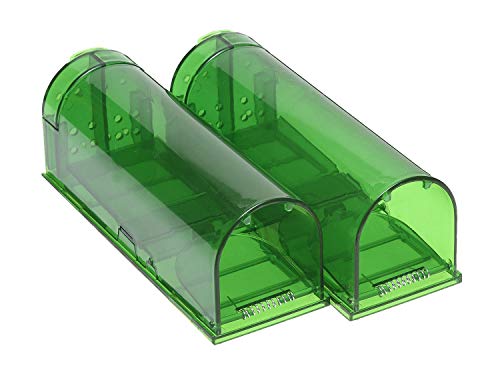 Chipmunks can cause significant damage to your yards with their burrows and by eating the bulbs in your garden.
Taking preventative steps is the best way to keep your home safe from chipmunk damage.

If you’ve found yourself overrun with chipmunks you’ve likely spent countless hours trying to figure out how to rid yourself of this frustrating issue. If you do not have any experience dealing with the rodents, it can be challenging to figure out which traps are best.

Fortunately, our team took the time to do some research and compile the five best chipmunk traps available today to help eradicate your infestation quickly.

How We Found the Chipmunk Trap

If you are struggling to catch a stubborn chipmunk in your home, this is one of the best chipmunk traps available. It is a humane option, as it will merely keep the chipmunk in one place instead of killing the rodent. Once caught, homeowners can figure out the best way to get rid of the creature. Customer will need to set bait to lure the chipmunk into the trap.

This trap is quite sensitive, which means the trap door will spring shut at even the slightest of movements. If you find yourself overrun with several chipmunks, this trap may not work well, since it will likely only catch one or two rodents at a time. Unless you plan to check the trap frequently, you may want to consider traps with larger capacities designed for more widespread groups.

For those trying to catch one or two stubborn chipmunks, this is an affordable catch-and-release trap.

If you’re looking for an affordable, non-lethal chipmunk trap, then this option from Harris could be the one for you. We liked that customers could purchase the traps in sets of one, two, or three. If you are dealing with a massive influx of chipmunks, this company makes it easy to buy more than one trap without breaking the bank.

This product is humane because it contains air holes that allow the chipmunks to breathe. Customers will need to check this product frequently to ensure so that they can release any chipmunks they’ve captured. Unfortunately, this trap only allows customers to catch one chipmunk at a time, so homeowners will want to check them frequently.

This plank trap has an auto reset feature that allows it to catch multiple rodents with one trap. It’s easy to set up, use and clean and is a reusable product.

If you are looking for a different, mess free trap to capture those sly and tricky chipmunks, consider the FABUTA Walk the Plank Mouse Trap. Its unique design literally forces pesky critters to walk the plank. Whether you wish to kill off the chipmunks or catch and release them, you can use this product.

The plank mechanism simply hooks onto the edge of any bucket with a thickness of .35” or less. You can make this bucket and plank more accessible to chipmunks and rodents by attaching a ramp leading up to the plank.

The plank is held up by a small magnet. When the plank is weighted down by a chipmunk the magnet will release and the plank drop down, causing the rodent to fall into the bucket. The plank will then raise back up to reset, keeping the chipmunk from being able to climb out of the bucket. 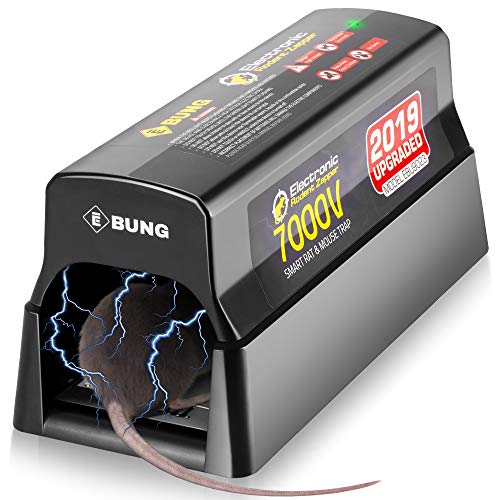 If you’re looking to kill chipmunks instantly and humanely, this is the trap for you.

If you’re in search of a lethal chipmunk trap, look no further than the EBUNG Electric Chipmunk Trap Zapper. When a chipmunk enters the unit and stands on the three trigger plates, it will receive up to 7000V of electricity. This should kill the rodent instantly, which makes for a quick, pain-free, and humane death. If the rodent moves, the system will send another shock to ensure the critter dies.

This unit operates on either batteries or an adapter, which means you can use it anywhere. However, this unit cannot get wet, which practically renders it useless outside. Additionally, the device will stop operating when it has killed a chipmunk. So, customers will need to check the trap frequently and remove any dead rodents. 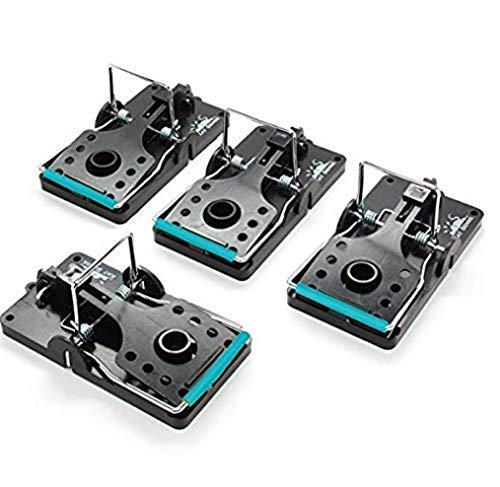 These spring traps are reusable, making them one of the best snap traps available.

Another lethal chipmunk trap is the Instant Kill Snap Trap from Kat Sense. If you’re interested in learning how to kill chipmunks, this is one of the easiest ways to do so. Customers can purchase a set of either four or six traps and set them in the areas where they suspect an infestation. Customers should include bait on the hatch to entice the rodents.

When chipmunks step on the trigger of the trap, the snap trap will fling forward, capturing the rodent. It will likely kill it instantly, making for a humane death. Homeowners will need to check the traps frequently to replace the bait and remove any dead rodents. Customers can wash the traps and set them again to catch additional chipmunks.

Why are Chipmunks Bad?

Many people look at chipmunks as cute creatures that are harmless, but this is not the case. Chipmunks are rodents that spread disease and infection, much like mice and rats. The beings also tend to emit a high-pitched noise similar to a bird. If chipmunks are in the walls of your home, they can quickly become problematic and annoying.

Additionally, chipmunks tend to feast on fruits and nuts. This could be a problem if you have a garden in your yard. The creature will likely attack your plants and ruin your harvest. It could also turn into a problem inside of your home, especially during winter. Chipmunks will probably enter your house looking for food and warmth.

Because many people view chipmunks as cute, they prefer not to kill the rodents. Instead, they rely on catch and release methods to help eliminate the problem. Catch-and-release traps can be useful, which is why we’ve included two on our list. We even gave one of them the title of “Best Overall.” However, just because the trap catches the rodents does not mean your problem is solved.

For catch-and-release traps to work, homeowners must release the rodents far away. Experts recommend releasing chipmunks at least 100 feet from your home. If you have a wooded area, you should release the pests in this location. However, some indicate that chipmunks end up returning to their home. Perhaps start with catch-and-release traps but know you may need stronger options later.

When Should You Use Traps?

Not all chipmunk traps are the same. The type of trap that you use will likely depend on the severity of your infestation. Unfortunately, many chipmunk traps are single-use. This means that users will need to reset them after they catch a chipmunk. If you are dealing with dozens of chipmunks, then these traps may not be best for you.

You should consider using single-use traps if you know that the chipmunk problem is an isolated incident. For instance, if you notice a chipmunk in a particular area in your home, you will likely want to consider traps. If you are dealing with multiple chipmunks, consider options like poison bait. Areas where you should consider placing chipmunk traps include:

We sympathize with customers who have a chipmunk infestation in their home or yard. Although chipmunks may seem like cute creatures, they spread disease and infections and are as significant of a threat as other rodents, such as mice. Customers should act swiftly when dealing with a chipmunk infestation. The five best chipmunk traps that we’ve provided should help you do so.

Figuring out the best way to get rid of chipmunks is up for debate. No matter if you prefer catching and releasing the animals, using a bucket trap, or killing them instantly, we’ve provided a product to help you achieve your goal. Using multiple traps should prove to be worthwhile, especially if you have a significant chipmunk infestation.