If you are a gardener or if you are a homeowner who is looking to maintain a healthy, beautiful lawn you are going to run into pests. Two pesky creatures that are notorious for digging runways through a homeowner’s yard and ruining gardens are moles and voles. Though both animals are burrowers and damage plant life from below, there is a distinct difference between how each of these creatures can affect your garden or lawn and how you should go about ridding yourself or preventing them in the first place.

How To Get Rid of Moles

Find a Local Vole Removal
Expert Near You

Moles do communicate and ‘chatter’ with each other through chirps, snorts, guttural noises, and high-pitched squeals. Some mole species also are known to wheeze.

Since moles live underground and navigate through underground tunnel passages, it’s very rare to see their tracks. Their feet are quiet large in proportion to their bodies and their front paws are considerably wide, which aids in their digging, and the hind paws are somewhat smaller, but both sets of feet have very sharp claws.

Again, living most of their life undergrounds, mole poop above ground is not that common. When found it is identified as pieces of small brown pellets.

If you’re not much of a wildlife enthusiast you may not know the difference between these two creatures, but there are distinct characteristics, features and behaviors that help you to identify them quickly. Moles are between six and eight inches with grey or black velvety textured fur. Despite what many believe, moles are not blind and do have eyes albeit they are small and hard to notice at a glance. Moles use their eyes to sense light as opposed to seeing. Moles also have large front claws for digging and a long hairless proboscis.

Moles use their extrasensory abilities to sense vibrations in the earth and move when they feel the least vibrations.

People often confuse the tunnels that moles dig with that of pocket gophers; however, pocket gophers will pull vegetation below the surface with them leaving a gaping hole, unlike molehills. Moles burrow between 12 inches and 18 inches below the surface in search of earthworms and white grubs which make up 75 percent of their diet. They also eat insects and other small invertebrates.

Moles can be found on six continents and are most active in the summer and spring. In the colder months, they burrow further below the surface and continue to eat worms and other burrowing insects. 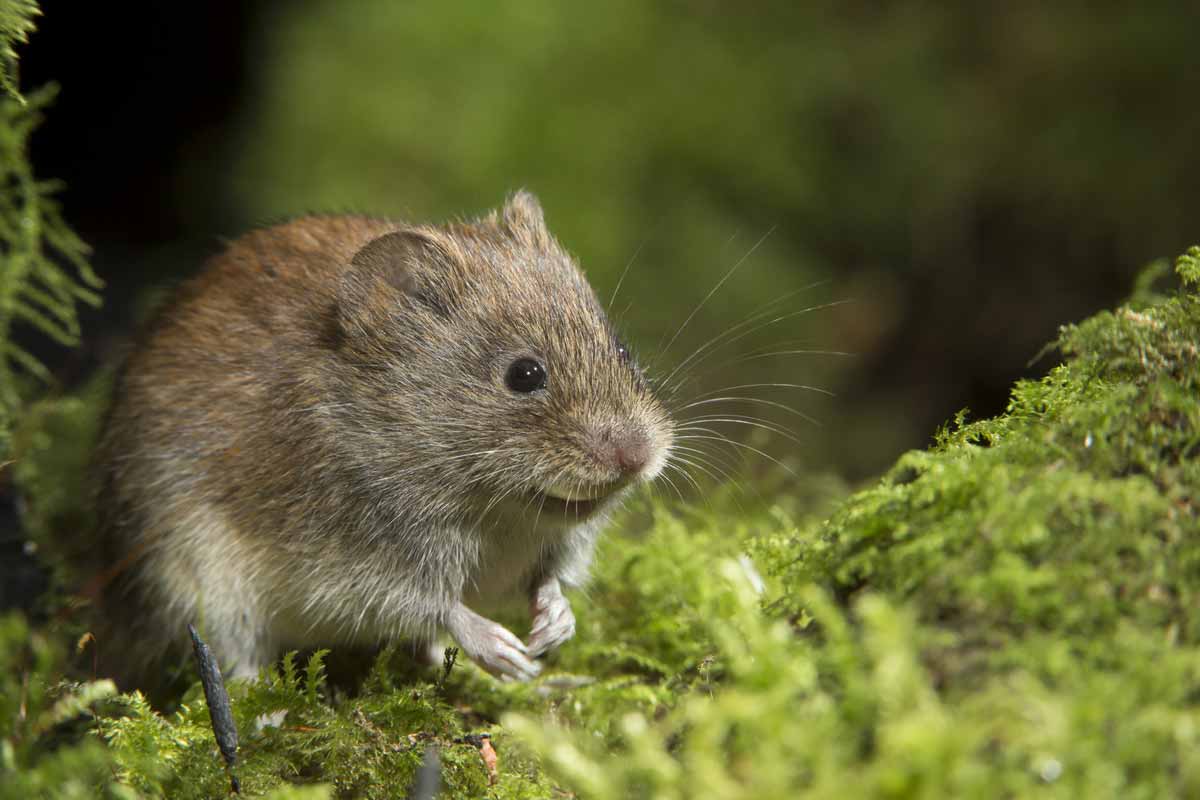 Voles are small but in their adult stage can be between four and nine inches.

Voles are also known as field mice, resemble most other rodents like shrews, hamsters, and gerbils. They have beady eyes, brown or gray fur, short legs, and a short furry tail. Voles are small but in their adult stage can be between four and nine inches.

Voles are burrowers that make their home beneath the surface; however, the runways that voles dig are subtle, and they do not leave any mounds behind. They are omnivorous and eat small insects but prefer to eat the roots of plant life and tree bark.

Like other rodents, voles reproduce at a high rate. One female vole can reproduce between six to ten times a year, and she can give birth to between five and ten young voles per litter. The average lifespan of a vole is between three and six months.

There are over 100 species of voles and 23 species found in North America. The only continent that voles cannot survive on is Antarctica. Voles are active year round but are the most active, and produce most abundantly in the spring and summer.

The first step to protecting your lawn or garden is recognizing signs of these pests before they do irreparable damage. Though both creatures burrow, there are differences in how the two burrow and how much damage each can potentially do. Signs of Mole in the Yard

Moles are well known for leaving large mounds of dirt behind also known as molehills. In search of worms or grubs, moles will also uproot plant life, so another clear sign of a mole is yellowing or dead vegetation.

If a mole is present in your yard, it is usually alone as moles are very territorial and are very violent towards other moles. It is possible that a second mole could be present, but it is not very common.

Moles almost never surface so you will not see one crawling around but you may see some of their tunnels even if you never physically see the mole. Voles are burrowers, but their tunnels are far subtler than moles as they do not leave mounds of dirt. Voles leave smaller runways and an entrance to their burrow. A good way of spotting a vole infestation is by looking for tiny three-inch holes.

The plant life will also begin to die when voles are present as they will start to eat the roots and bulbs of all vegetation in the vicinity. If you have a garden, especially a fruit or vegetable yielding garden, you may notice that the plants may begin to wilt or cease growing. Be on the lookout for gnaw marks around bushes, tree bark, and plants in your garden.

Voles build nests near trees with dry sticks and straw. These nests can house between 30 and 70 voles making ridding yourself of these critters tough.

To ensure that your lawn or garden is safe from these pests you have to remain vigilant for signs of infestation and take preemptive measures a soon as you notice them as the long-term damage these creatures could do could be irreparable. If your yard is always soggy and wet, it will be very inviting for moles.

How To Prevent Moles

The simplest and most affordable way of avoiding a mole from taking up residence in your yard is by limiting the amount you water your lawn. Moles need dark, soft soil as it makes it a lot easier for them to burrow, so only water your lawn when it is necessary. If your yard is always soggy and wet, it will be very inviting for moles.

Another way to prevent moles is by purchasing a sonic spike. These devices emit high pitched noises that scare moles away. As moles prefer less movement and quiet when they are digging for their food, the sonic spike acts as an underground scarecrow of sorts. Once you have buried it in your garden, it serves as a sound mine and goes off when burrowing creatures are near it.

There is also a product called liquid fence which once added to your soil effects the worms and other insects that moles feed on by making them have an odor or taste that repels them. Once their food source is contaminated the moles are as good as gone and if you ever have another infestation all you have to do is merely reapply repellent. Voles are very hard to get rid of, and in some cases, your only option sometimes is to get a professional to poison them.

Voles are attracted to vegetation, so keeping your lawn cut low is a simple and cost-effective way of repelling voles. If your yard is unkempt and has a lot of overgrown foliage, it could potentially be a buffet for dozens of these woodland rodents.

Like other rodents, voles are sensitive to smells, and there are natural household repellents in your kitchen you could use to ward them off. For instance, cayenne pepper, black pepper, garlic, capsicum and vegetable oil are cheap remedies for voles. To make your repellent, grind up any of these spices in water and apply to your lawn. The smell is unbearable and will keep them away.

If you ever find yourself overrun by this common rodent you may need to hire professional pest control to get rid of them. Voles are very hard to get rid of, and in some cases, your only option sometimes is to get a professional to poison them. Do not try to purchase vole poison on your own. You should have to have a trained professional apply it for you to get rid of these pesky creatures.

Though these pests may appear to be cute woodland creatures they actually pose a significant threat to your garden and lawn and could virtually destroy or eat every bit of vegetation around your house leaving your yard barren. A homeowner should look out for vole activity as they reproduce so rapidly that these rodents could overrun your property and create damage that is quite costly to repair. Moles are a threat as well, but they are not aiming to eat plant life though they do inherently destroy it and homeowners and horticulturalists should be wary of this unassuming destructive animal. In conclusion, you would not want either of these creatures in your yard, so it is crucial to look for the signs before they wreak havoc.