Home Snakes How To Tell If A Snake Is Poisonous

How to Tell If a Snake Is Poisonous

For most people, it doesn’t matter if a snake is venomous or not, they just don’t want to be anywhere near it. Snakes may play an important environmental role by helping control the rodent population, and while we are grateful, we usually don’t want or need to see them up close to appreciate their significance. An average garter snake is enough to strike fear but coming in contact with a venomous snake can leave you breathless. And for a good reason, venomous snakes can be dangerous, even deadly.

How To Get Rid of Snakes

Find a Local Snake Removal
Expert Near You

We tend to think that snakes only hiss and rattle, but they actually have a few surprises we hadn’t considered: they can issue a growl (different pitches per species), some can shriek, and they fart! Some snakes, when cornered, will force air through vents in their back ends resulting in multiple popping sounds, aka flatulence. But more than not, you’ll either hear a snake rattling through leaves (making the sounds even without an actual rattler) or hissing.

Snake tracks aren’t overly obvious unless you’re looking for them, or the terrain allows for them. Sand, mud, dirt, and soil are the best receptors for tracks to be found. Snake tracks, while clearly taking a ‘slithering’ motion, will either take on a side-winding, side-pushing, lateral undulation, or a scrunch-up-scrunch-out motion called ‘concertina’. Straight line tracks are generally made by larger and heavier species of snake.

Snake poop is pretty mushy and and smooth, and will often contain undigested portions of what they’ve eaten, including bones and fur. When fresh, snake poop is dark brown in color, but will turn chalky as it dries out. It comes out oblong shaped, with a white liquid excretion of urea. The size of the poop will specify the size of the snake, and its contents indicate which species you’re dealing with.

There are about 50 different species of snakes in the United States, but the venomous ones fall into only four categories—copperheads, coral snakes, rattlesnakes, and water moccasins. The head of a copperhead is copper red, and their bodies can range in color from reddish-brown to golden tan. They have ridged scales and are best known by the hourglass-shaped crossbands on their body that are usually dark or reddish-brown. On average, copperheads only weigh about a pound but can grow up to three feet long.

Copperheads typically call the eastern part of the United States home but can commonly be found as far west as Texas. They prefer to live in areas close to a water source, but you’ll also find them in forests or rocky areas. 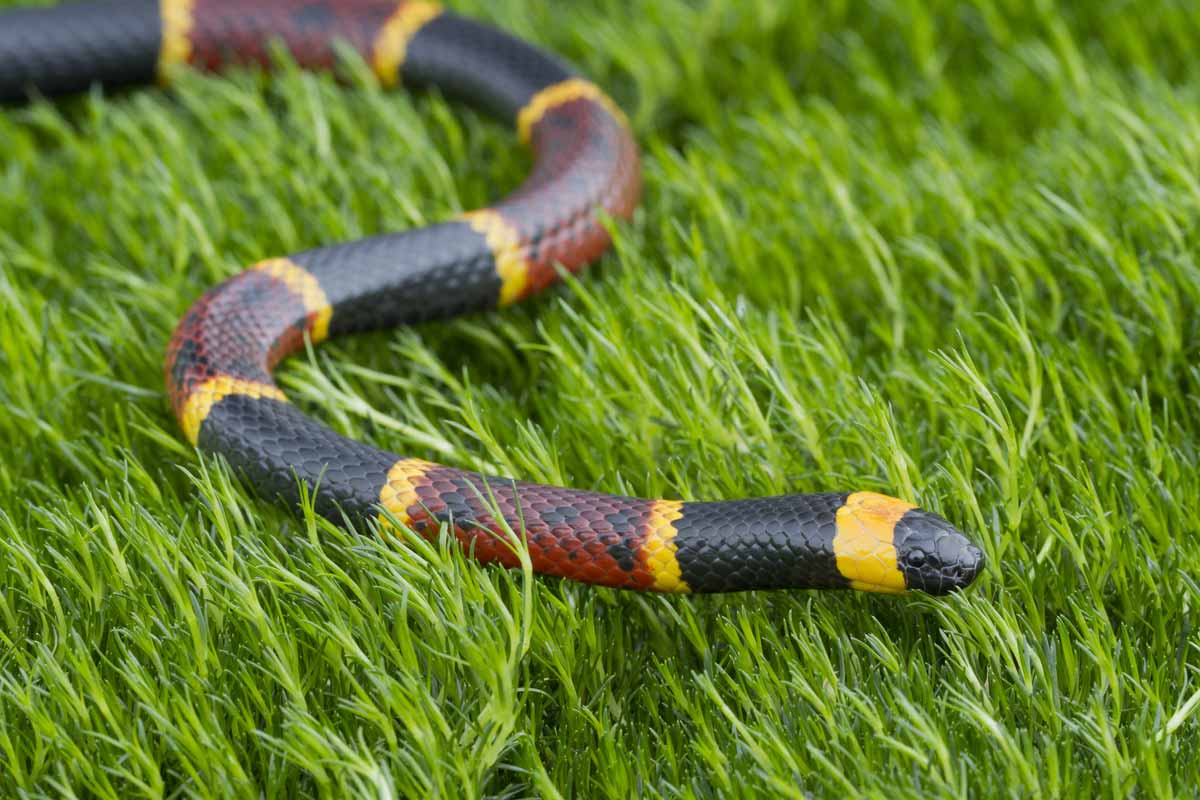 Red and yellow, can kill a fellow. Red and black, a friend of Jack.

Coral snakes are slender with red, yellow and black bands that run the length of their body. They weigh less than two pounds but can grow up to 30 inches long. Their heads, tails, and noses are all round, and they have round pupils and short fangs.

Corals are reclusive snakes that prefer wooded, sandy or marshy areas. But you will also find them hiding in leaf piles or burrowing in the ground. They’re most commonly found living in the southern part of the United States.

There are a couple of other snakes that look like the coral snake but aren’t venomous. An excellent way to know the difference is to keep this rhyme about the coral snake’s color pattern in mind:

“Red and yellow, can kill a fellow. Red and black, a friend of Jack.”

They have distinct black diamond patterns with yellow borders on their black and gray bodies. 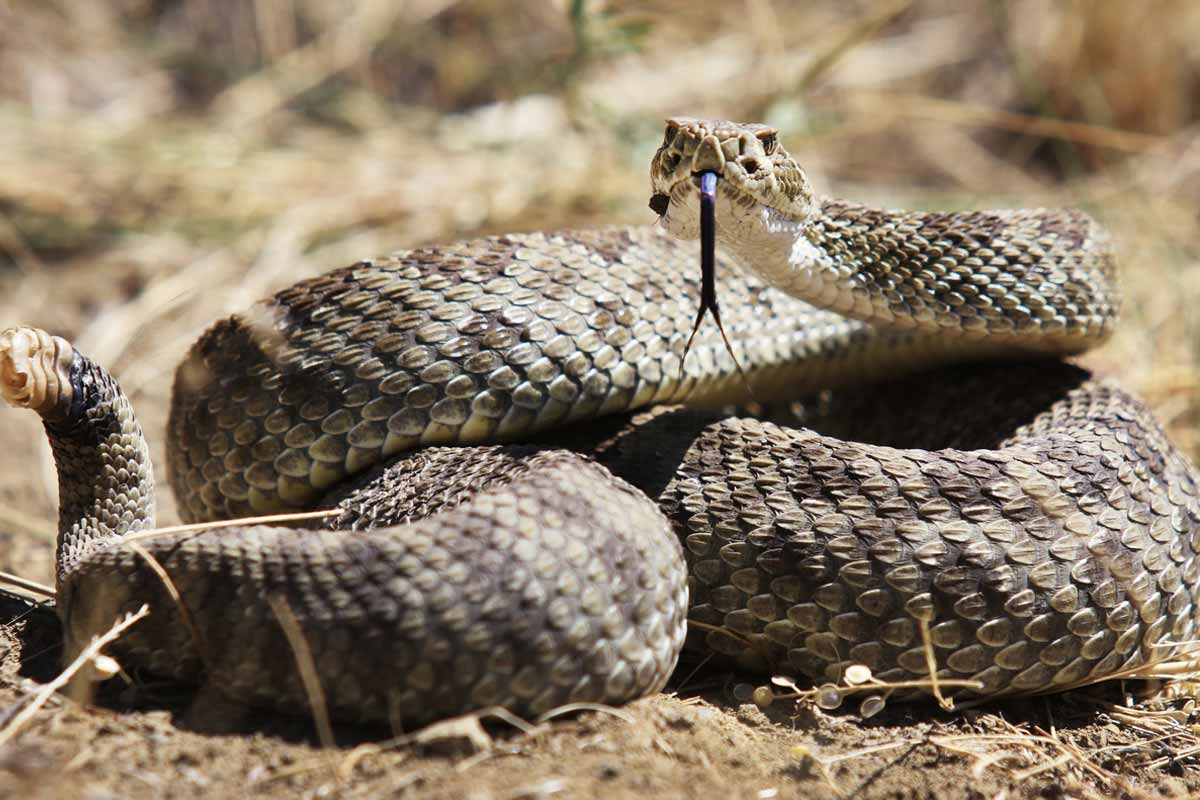 There are several types of rattlesnakes, but the most common fall into two classes – the Eastern Diamondback and the Western Diamondback. Eastern Diamondbacks are the largest poisonous snake in the U.S. They can weigh up to 35 pounds and grow up to eight feet long. They have distinct black diamond patterns with yellow borders on their black and gray bodies. They have triangular heads, large fangs and a tail that rattles.

Eastern Diamondbacks like living in pine forests, mountains, and dry marsh along the coast of Florida and the lower, southeastern part of the United States.

Western Diamondbacks are smaller but just as dangerous. Their brown, gray or pinkish bodies can grow up to five feet long and weigh as much as ten pounds. They have dark, diamond-shaped blotches and light-colored scales. The shape of their heads is like a spade, and they have a dark, diagonal stripe on each side of their face.

Their rattling tail is most often heard in Arizona, New Mexico, Texas and the southern part of California. They prefer deserts, salt marshes and rocky mountain areas as a home base.

They’re rather big snakes, weighing up to four pounds and growing up to 55 inches long. 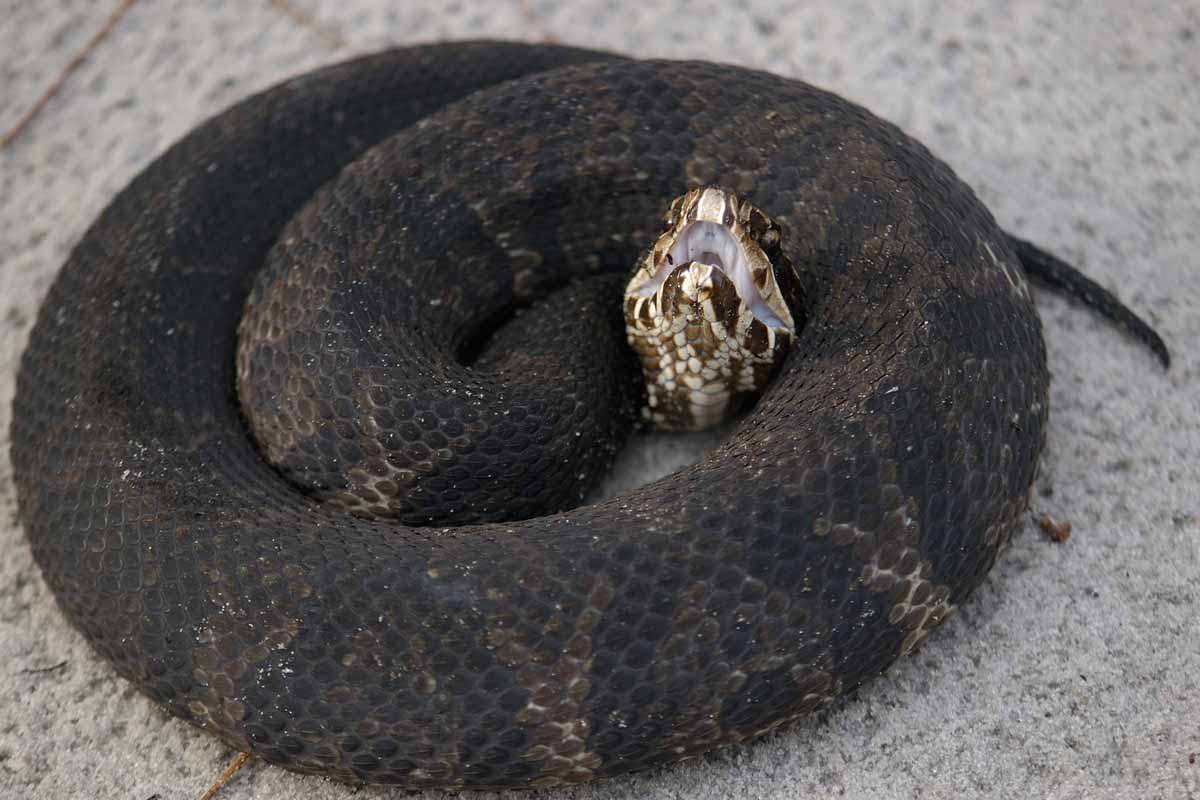 Water Moccasins are also known as cottonmouths because the inside of their mouths is as white as cotton when they’re open. They’re rather big snakes, weighing up to four pounds and growing up to 55 inches long. The coloring is different for adults and juvenile water moccasins. Adults have dark tan, brown, black bodies with black or dark brown crossbands. Younger water moccasins have bold brown or orange crossbands and a yellow tail. They have thick, muscular bodies, blocky, triangular heads, and cat-like pupils.

As the name implies, water moccasins love the water. It’s not unusual to see them swimming above the surface in a lake, creek or other bodies of fresh water. You can also find them under logs, rocks or branches near a water source.

Most venomous snakes—except for the coral snake—have an arrow or a triangle shaped head.

How Can You Tell If a Snake Is Poisonous

It’s best to always be safe and assume a snake is venomous unless you’re absolutely sure it isn’t. Venomous snakes in the U.S. are known as pit vipers—meaning they have a pit between their eye and nostril on the sides of their head. The pit helps them to sense warm-blooded prey without seeing it. You certainly don’t want to get close enough to see the pit, but there are other ways to be able to tell—if you stay around long enough to look. Most venomous snakes—except for the coral snake—have an arrow or a triangle shaped head. Coral snakes have rounded heads, but their distinct red, yellow, black color pattern helps to identify them quickly.

A venomous snake usually has cat-like pupils. They are vertical or elliptical.

You’ll find a single row of scales on the underside of a venomous snake’s tail. You’ll hear the distinctive rattle from the tail of a rattlesnake.

If the snake doesn’t feel threatened, it will more than likely try to escape for cover.

What to Do If You Encounter a Venomous Snake

If you’re out enjoying nature when you encounter the snake, it’s best just to leave it alone. Don’t make any sudden movements toward the snake. If it’s in your yard, pool or house, try to remember what it looks like and contact a trained professional. You never want to attempt to handle or get rid of a venomous snake by yourself. 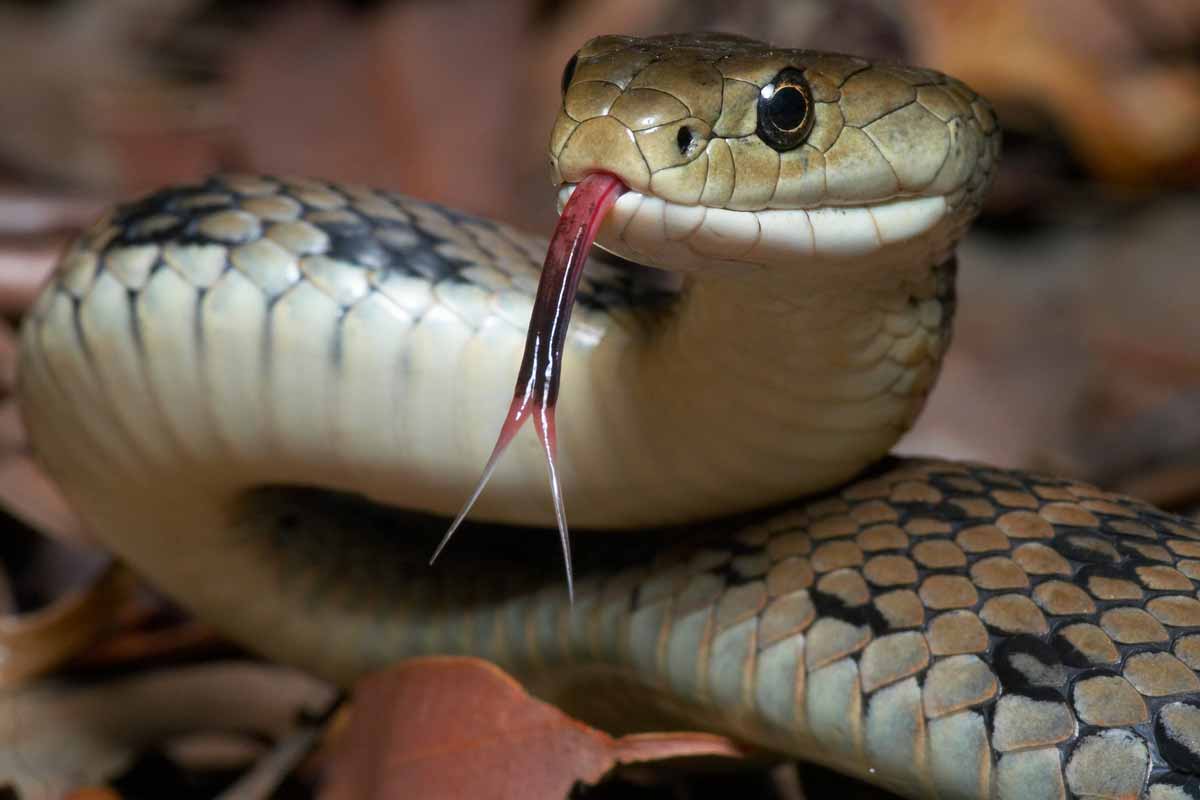 Bites from a coral snake can cause neurological symptoms like weakness, tingling or difficulty speaking.

Hopefully, a bite from a poisonous snake won’t be something you will ever have to deal with. But if it happens, there are some things you should be aware of. If the snake is poisonous, there will be severe and burning pain at the site of the wound within 30 minutes. The area can begin to swell and bruise, and since most snakebites happen on extremities, the swelling and bruising can spread all the way up your arm or leg. You may also become nauseous, weak and develop an odd taste in your mouth. Bites from a coral snake can cause neurological symptoms like weakness, tingling or difficulty speaking.

If a snake bites you, the first thing you should do is call 911. The emergency room can administer an anti-venom drug. The Mayo Clinic has some recommendations for what you should and should not while you’re waiting for help:

Being bitten by a venomous snake is somewhat rare. It happens to fewer than 38,000 people in the United States every year and only five or six of those ends in death. You’re more likely to be killed by a lightning strike. But even though statistics are on your side, you don’t want to take the chance. So always be alert when your outside, especially in unfamiliar territory. And if you encounter a snake, it’s best to steer clear and get as far away as you can.