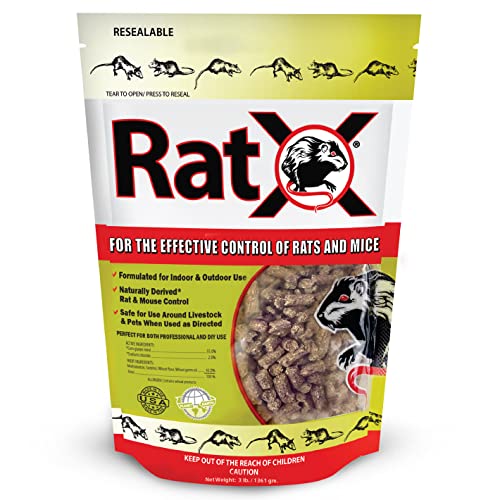 Rats can cause major structural damage to your home through gnawing, nest-building, and defecation.
The best way to protect your home is to take preventative steps to keep them out.

There’s nothing subtle about a rat infestation. They are destructive and can cause significant damage to your property unless you take prompt action. The best rat poison pellets offer a practical solution to get the problem under control fast. Having these pests in your home carries serious health risks because they are carriers of parasites and diseases like hantavirus pulmonary syndrome and salmonella.

Continue reading to learn how to restore your peace of mind with the best products for the job.

How We Found the Best Rat Poison Pellets

The Motomco Tomcat Rat and Mouse Bait Pellets act quickly to get rid of rodents in a form that is easy to use.

The Motomco Tomcat Rat and Mouse Bait Pellet uses both diphacinone and bromadiolone. Both are anticoagulants with the former a first-generation ingredient and the latter a second-generation one. Using the two means quicker results. The 10-pound bucket contains plenty of product to last a long time if you have a severe infestation.

You shouldn’t use this bait if you have pets because of the risk of harming them if they eat the carcasses. It has an enticing scent to help overcome the rodents’ shyness for better effectiveness.

The EcoClear RatX Rat and Mouse Killer Pellets target just rats and mice, making it an excellent choice if you have pets or small children in your home.

The EcoClear RatX Rat and Mouse Killer Pellets is a unique product formulated specially for rats and mice. The physiology of rodents varies with the species, making some less effective than others. This one minimizes the risk to non-targeted species and pets, so it’s safer to use. It is also eco-friendly and won’t persist in the soil or environment if you use it outside.

However, it is expensive, especially if you have a large area to cover. It deteriorates quickly, so you shouldn’t use it before a heavy rain.

The Norway rat and roof rat are some of the most destructive pests you’ll find. They are intelligent animals that learn the ins and outs of their environment quickly. That behavior also makes them a formidable challenge for a homeowner. They are wary by nature and will avoid anything new in their environment—including the best rat poison pellets.

Rats are also adaptable and will pick up on your home’s activity patterns. That’s why you may see the damage before you spot the rodents. They are nocturnal, preferring the cover of darkness to escape detection. They have a keen sense of smell too which can help them identify changes in their habitat. Norway rats live all across the United States. Roof rats prefer the warmer coastal areas instead.

Rats only live about a year or two. But during that time, they’re producing a lot of young – upward of 20 each year. That makes getting them under control fast imperative. As long as they’re in your home, they pose safety and health risks to your family and pets. Luckily, you have several options for taking charge of the problem.

Poisons or rodenticides are effective means of control as long as you use them correctly. Many are toxic to pets, non-targeted wildlife, and humans too. That’s why it’s imperative to use them as directed on the label without deviating from these instructions. It’s against federal law if you do.

You must—and should— only get products for the pest you’re trying to control. EcoClear RatX Rat and Mouse Killer Pellets, for example, target just these animals. It won’t work with voles or moles because their physiology is different than those rodents.

You’ll see products described as either first or second-generation pesticides like Motomco Tomcat Rat and Mouse Bait Pellet which has both. Many are anticoagulants. They cause fatal internal bleeding in the rodents.

While useful, the animals must eat sufficient amounts of it which typically takes a few days. That can present a problem with rats and their leery nature because they also have an excellent sense of taste.

Second-generation rodenticides like Farnam Just One Bite II Place Pack Pellets get around that issue with products that can kill with just one dose. That makes them more dangerous to use, especially if you have pets or small children in your home. It’s also a problem since they last longer in the rat’s body. They can also harm any animal who eats the carcass—including your dog or cat.

Some act similarly to the first-generation pesticides. Others work differently. Zinc phosphide, for example, converts into a poison gas inside of the animal’s body and acts promptly to dispatch the pest. The key to controlling rats is the correct placement of the rodenticide.

The best place to put them is where you’ve seen evidence of activity, especially along walls or the sides of a building. Be patient because it may take a few days before you notice a drop in damage or other signs. If you’d prefer to use another method, there a few other things you can try.

How to Prevent a Problem with Rats

Maintaining a sanitary environment and making your home rat-proof are the best ways to avoid an issue in the first place. It’s essential to make sure that the rats won’t find an accessible source of foodstuffs whether it’s in your cupboards or your pet’s food bowl. Only keep it in closed containers. The same precautions apply to your yard too. Use animal-proof garbage cans or store them in the garage.

You must also secure your house to shore up any gaps or openings that can provide an entrance. Walk around the perimeter of your home, looking for signs of damage including screens and doors. Rats can squeeze through small spaces down to one-half inches. These measures are an ongoing task that you’ll need to repeat frequently to keep your property pest-free.

The best rat poison pellets will rid your home and yard of these pests promptly without harming your family or pets. Proper usage is crucial for decisive action and safety. Read the entire label of the product before you use it to protect everyone and ensure effective control.